During the summertime, your toes are often on display with open-toed sandals and days at the pool. That means it’s more likely you’ll look down and notice changes, like, for example, a bump on your baby toe. Uh-oh!  That, friend, could be the beginning of a bunionette, and though smaller in stature than its big brother bunion, it can still be a big pain! 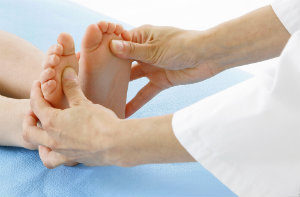 Bunionettes are basically bunions but instead of forming on the big toe joint, they develop on your little toe joint. The same forces are at work here: an inherited foot structure prone to the problem, and outside pressure (typically from too tight of shoes) encouraging the toe to drift out of alignment, forcing the joint outward and the toe inward. The more pressure placed on the little toe joint, the worse the bunionette gets, and the worse it hurts!

Because bunions and bunionettes are similar conditions, they have similar solutions. You can decrease pain by using padding for a layer of protection between your toe and your shoe. Speaking of shoes – make a switch! Replace narrow, tight footwear with shoes that offer wide, deep toe boxes so toes aren’t squished. Slipping some orthotics inside can help redirect pressure away from your little toe joint, too. There are also stretches you can do and splints you can wear at night to help keep your toe in proper position. Again, like bunions, if these tactics fail to relieve your pain and slow progression, surgical procedures may be considered.

If you notice a bump on your baby toe, don’t let it go – if you do, it will only get worse! Call us so we can assess your condition and determine a treatment plan that works for you.

You can reach our Bloomington, IN office at (812) 333-4422. In the meantime, better sweat the small stuff! Make sure those sandals of yours aren’t adding to the problem and making your little bunionette a big pain.

Why Do Bunions Happen Anyway?

There are many misconceptions in society, some of which include misunderstandings as to why bunions happen. Others include:

As we noted, another popular misconception is centered on the causes of bunions. Contrary to common belief, bunions are not caused by fashionable women’s shoes. Now, don’t get us wrong, footwear featuring narrow fronts and high heels do certainly contribute to an existing issue and lead to increased pain. The cause of a bunion, though, is more likely the result of:

No matter the root cause of your bunion, you should come and see us at our Bloomington, IN office if you have developed one of these common toe deformities. An untreated bunion will only worsen over time. Conservative methods can slow a bunion’s development and possibly ease symptoms, but we may recommend surgery to correct the deformity.

For more information about bunion treatment or our practice, either give us a call at (812) 333-4422 or contact us online today and we will be glad to help.